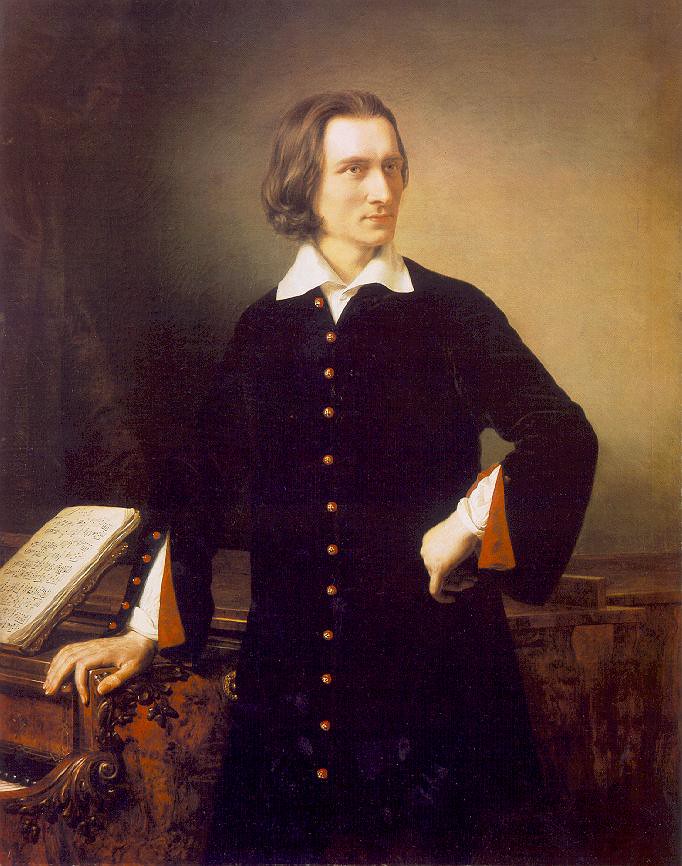 “Beware of missing chances; otherwise it may be altogether too late some day.”
–Franz Liszt

Although best known for his virtuosity as a pianist, beyond being a superstar soloist, Liszt was also a prolific composer, writer, and all-around music entrepreneur.

He forged his own path and musical identity, contributed broadly to the evolution of Western music, and left behind an enduring legacy.

In celebration of his bicentennial, in this post, I’ve compiled links to some of the extraordinary Liszt resources available on the Web.

For a concise illustrated biography of Liszt, visit Wikipedia.

There’s also an informative piece on the Deutsche Welle site that explores the tension between Liszt’s Austrian and Hungarian identities. Titled “Liszt bicentennial prompts dissonance over composer’s true identity,” it features a funny 1842 cartoon showing fans at a Liszt piano concert forming a 19th-century version of a mosh pit.

Throughout 2011, pianist Stephen Hough has been blogging about Liszt. His insightful writings include “Liszt: the man who invented stage fright.”

Scores of Liszt’s compositions can be downloaded free from the IMSLP. Many of the editions posted there can also be obtained from the digital collections at the Bavarian State Library, sometimes in higher-resolution files.

Also housed on the IMSLP are a number of autograph manuscripts such as the Sonata in B minor for solo piano.

The Juilliard Manuscript Collection has eight manuscripts available for online viewing – some are autographs; others were notated by copyists but include annotations by Liszt.

To locate more manuscripts, the Musical Treasures Consortium at the Library of Congress provides access to a number of collections.

Speaking of the LOC site, the page “Franz Liszt at the Library of Congress” provides links to the library’s holdings.

The Nederlands Muziek Instituut has also posted some letters and manuscripts.

Excellent modern editions of Liszt’s music have appeared of late, among them, Pathways to Franz Liszt published by Wiener Urtext Editions, which brings together solo piano works of easy to intermediate levels.

For a sampling of Liszt’s letters, on Google Books, there’s a preview of Liszt Letters in the Library of Congress (Pendragon 2003).

Liszt’s birthplace of Raiding Austria celebrates with the Lisztomania Festival, complete with concerts and exhibits.

Aside from what you’ll find on those sites, Liszt celebrations are taking place worldwide, so search your local listings.

Related posts
The 4 Types of Music Editions
Celebrating the Chopin Bicentennial
Schumann at 200
What Makes an Entrepreneurial Musician?